Colon Cancer: What to Look for and Who is at Risk

Chadwick Boseman, the beloved actor most famous for his role as T'Challa in "Black Panther," died from colon cancer on August 28. It's a disease that disproportionately affects the Black community, and — in particular — young Black men.

Boseman, who also starred in many other movies, including "42" and "Marshall," was just 43 when he died, and had been reportedly fighting colon cancer for four years. That means he was well below the recommended regular screening age of 45 when he was first diagnosed.

"Colorectal cancer is the second deadliest cancer in the country," Dr. Durado Brooks, vice president of prevention and early detection at the American Cancer Society said in a press release. "This disease is ravaging the Black community."

The report shows Black men in particular are at the greatest risk — they are nearly 50 percent more likely to die of colon cancer than white men. 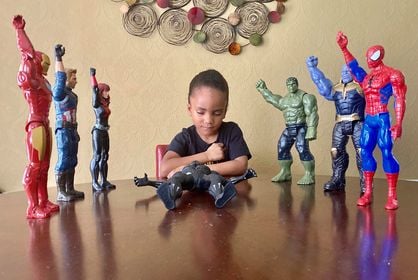 As a mom of Black sons, losing a man like Chadwick Boseman — who became a symbol of greatness for so many through his stellar performances of iconic Black people and characters —  is hard to fathom.

I loved him for the obvious, but posthumously, I respect him even more. His role as Black Panther showed our kids that anyone could be a hero, but how he lived his life teaches us that you can do anything you set your mind to doing.

Sadly, my boys are familiar with death, having lost several close relatives, so it was no question that I’d share his death with them. I explained the difference between a character and a real person to my little one, Kollin (pictured above), and told him that this doesn’t necessarily mean that Black Panther is dead. There will be others to come, and they will also do a great job because the power to be good lives within all of us.

Here's what the American Cancer Society wants you to know about colon cancer:

When to advocate for earlier screening

Those with higher risk should, with input from their physician, consider screening earlier than the age of 45.

When to call a doctor immediately

There are signs and symptoms of colorectal cancer to watch for. Those include:

Read more about signs and symptoms of colorectal cancer.

Many lifestyle-related factors have been linked to colorectal cancer. In fact, the links between diet, weight, and exercise and colorectal cancer risk are some of the strongest for any type of cancer, according to the American Cancer Society.

Not smoking, avoiding alcohol use, and following a healthy eating pattern that includes plenty of fruits, vegetables, and whole grains, and that limits or avoids red and processed meats and sugary drinks can lower your risk.

But it's important to note that not all people who develop colorectal cancer have these risk factors and doctors aren't sure why.

“The bottom line is we just don’t know,” Dr. Robin B. Mendelsohn, co-director of the Center for Young Onset Colorectal Cancer at Memorial Sloan Kettering Cancer Center, told the New York Times. The New York Times reported that Dr. Mendelsohn and her colleagues are exploring whether diet, medications like antibiotics, and the microbiome — which have all changed significantly for generations born in the 1960s and later — might be contributing to the cancer in younger people.

All people ages 45 and over should be screened regularly for colon cancer.

"It is as important as ever that everyone has access to and is receiving the recommended screenings. Even during the coronavirus pandemic, necessary screening tests remain available to prevent the disease or find it at an early, more treatable stage," Dr. Brooks says.

Screening can prevent colorectal cancer by finding and removing growth, called polyps, in the colon and rectum before they become cancer. It can also find colorectal cancer early, when it is small, hasn't spread, and may be easier to treat. When found early, before it has spread, the 5-year relative survival rate is 90 percent.

Chadwick Boseman seems to have lived his life offscreen as he did onscreen — a hero, both in his words and his actions. Hopefully his tragic death leads to awareness — about the very real risk of colorectal cancer, especially among young Black men. We don't want to lose any more heroes to this terrible disease.

Like many of you, we strive for health and wellness in our houses despite the chaos of life with kids, work, activities and so much more. Join us on this journey!